Argan oil , The rare tree , Its benefits are great

Argan oil is a plant oil produced from the kernels of the argan tree (Argania spinosa L.) that is endemic to Morocco. In Morocco, argan oil is used to dip bread in at breakfast or to drizzle on couscous or pasta. It is also used for cosmetic purposes.

The fruit of the argan tree is small, and round, oval, or conical. A thick peel covers the fleshy pulp. The pulp surrounds a hard-shelled nut that represents about 25% of the weight of the fresh fruit.
The nut contains one to three oil-rich argan kernels. Extraction yields from 30% to 50% of the oil in the kernels, depending on the extraction method.[3]
Extraction is key to the production process. To extract the kernels, workers first dry argan fruit in the open air and then remove the fleshy pulp. Some producers remove the flesh mechanically without drying the fruit. Moroccans usually use the flesh as animal feed. There is a tradition, in some areas of Morocco, of allowing goats to climb argan trees to feed freely on the fruits. The kernels are then later retrieved from the goat droppings, considerably reducing the labour involved in extraction at the expense of some potential gustatory aversion.[4] In modern practice the peels are removed by hand.[5]
The next stage involves cracking the argan nut to obtain the argan kernels. Attempts to mechanize this process have been unsuccessful, so workers still do it by hand, making it a time-consuming, labour-intensive process. Berber women often engage in this arduous task.
Workers gently roast kernels they will use to make culinary argan oil. After the argan kernels cool, workers grind and press them. The brown-coloured mash expels pure, unfiltered argan oil. Finally, they decant unfiltered argan oil into vessels. The remaining press cake is protein-rich and frequently used as cattle feed.[3]
Cosmetic argan oil is produced almost identically, though the argan kernels are not roasted to avoid an excessively nutty scent.
The decanted argan oil is left to rest about two weeks so that solids suspended in the argan oil settle to the bottom. The clearer argan oil is further filtered, depending on the required clarity and purity. Pure argan oil may contain some sediment. 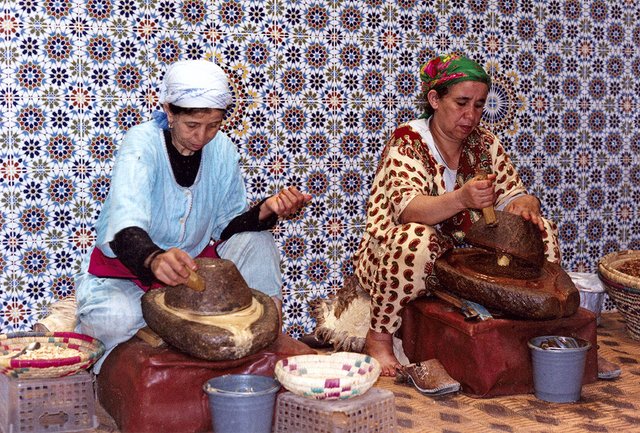 Argan oil has a relative density at 20 °C (68 °F) ranging from 0.906 to 0.919.[2]
Argan oil contains tocopherols (vitamin E), phenols, carotenes, squalene, and fatty acids, (80% unsaturated fatty acids)[6] The main natural phenols in argan oil are caffeic acid, oleuropein, vanillic acid, tyrosol, catechol, resorcinol, (−)-epicatechin and (+)-catechin.[7]
Depending on the extraction method, argan oil may be more resistant to oxidation than olive oil.[8]
Culinary[edit]
Culinary argan oil (argan food oil) is used for dipping bread, on couscous, salads and similar uses. Amlou, a thick brown paste with a consistency similar to peanut butter, is produced by grinding roasted almond and argan oil using stones, mixed with honey and is used locally as a bread dip.
Various claims about the beneficial effects on health due to the consumption of argan oil have been made. A research article published in 2010 found that argan oil contained higher levels than other oils of γ-Tocopherol, which possesses strong chemopreventive and anti-inflammatory properties.[9]
Cosmetic[edit]
Moroccans traditionally use un-roasted Argan oil to treat skin diseases, and as a cosmetic oil for skin and hair.[10]
Argan oil has become increasingly popular for cosmetic use. The number of personal-care products on the US market with Argan oil as an ingredient increased from just two in 2007 to over 100 by 2011. Argan oil is also sold without additives as a natural skincare and hair care product.
The increasing popularity of Argan oil has prompted the Moroccan government to plan for increased production, with their aim being to increase annual production from around 2,500 to 4,000 tonnes by 2020.[11]
Impacts[edit]
Environmental[edit]
The argan tree provides food, shelter and protection from desertification. The trees' deep roots help prevent desert encroachment. The canopy of argan trees also provides shade for other agricultural products, and the leaves and fruit provide feed for animals.[2]
The argan tree also helps landscape stability, helping to prevent soil erosion, providing shade for pasture grasses, and helping to replenish aquifers.[12]
Producing argan oil has helped to protect argan trees from being cut down. In addition, regeneration of the Arganeraie has also been carried out: in 2009 an operation to plant 4,300 argan plants was launched in Meskala in the province of Essaouira.[13]
The Réseau des Associations de la Réserve de Biosphère Arganeraie (Network of Associations of the Argan Biosphere Reserve, RARBA) was founded in 2002 with the aim of ensuring sustainable development in the Arganeraie.[14]
RARBA has been involved with several major projects, including the Moroccan national antidesertification programme (Programme National de Lutte contre la desertification, PAN/LCD). The project involved local populations and helped with improvements to basic infrastructure, management of natural resources, revenue-generating activities (including argan oil production), capacity reinforcement, and others.[15]
Social[edit]
The production of argan oil has always had a socioeconomic function. At present, argan oil production supports about 2.2 million people in the main argan oil-producing region, the Arganeraie.[11]
Much of the argan oil produced today is made by a number of women's co-operatives. Co-sponsored by the Social Development Agency with the support of the European Union, the Union des Cooperatives des Femmes de l’Arganeraie is the largest union of argan oil co-operatives in Morocco. It comprises 22 co-operatives that are found in other parts of the region. [16]
Employment in the co-operatives provides women with an income, which many have used to fund education for themselves or their children. It has also provided them with a degree of autonomy in a traditionally male-dominated society and has helped many become more aware of their rights.[17]
The success of the argan co-operatives has also encouraged other producers of agricultural products to adopt the co-operative model.[18] The establishment of the co-operatives has been aided by support from within Morocco, notably the Fondation Mohamed VI pour la Recherche et la Sauvegarde de l’Arganier (Mohammed VI Foundation for Research and Protection of the Argan Tree),[19] and from international organisations, including Canada's International Development Research Centre[20]and the European Commission.[17]